A meeting within the framework of the international project “Empowering Participatory Budgeting in the Baltic Sea Region” (EmPaci) was held in the municipality Moskovskaya Zastava.

At the meeting active and interested residents of Moskovskaya Zastava discussed issues of improvement of the territory, which had been selected for work within the framework of an international project, aimed to increase citizens' involvement in the process of creating a comfortable urban environment. During the meeting, residents expressed their wishes and comments on the improvement projects presented by the head of municipality  Yuri Dokukin.

Project coordinators from the Council of Municipalities and ITMO University told residents about the goals and objectives of the project, as well as presented the best Russian and international practices in the field of participatory budgeting.

Based on the suggestions of residents, priority areas were identified for further development of improvement projects. The cycle of meetings with residents and training sessions will continue in February-March 2021. 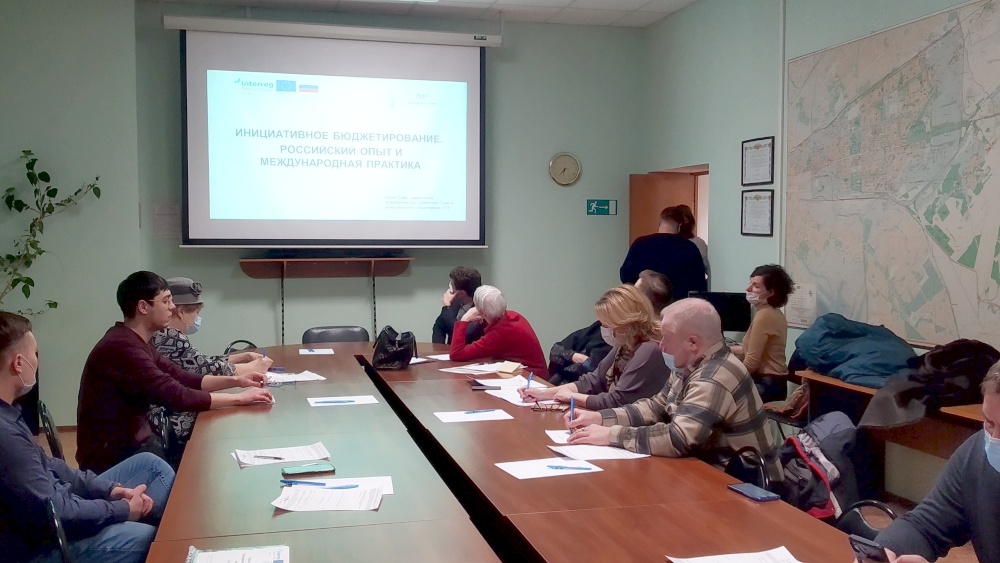 On December 14, 2021, a form for submitting ideas for improvement of adjoining territories was published in the newspaper of the local government of the municipal district Moskovskaya Zastava. This started the first cycle of participatory budgeting, which will continue next year and will allow residents of the municipality to take an active part in shaping a comfortable future for their area.

The preparation and launch of this pilot took place with the active participation of all Russian partners of the EmPaci project. 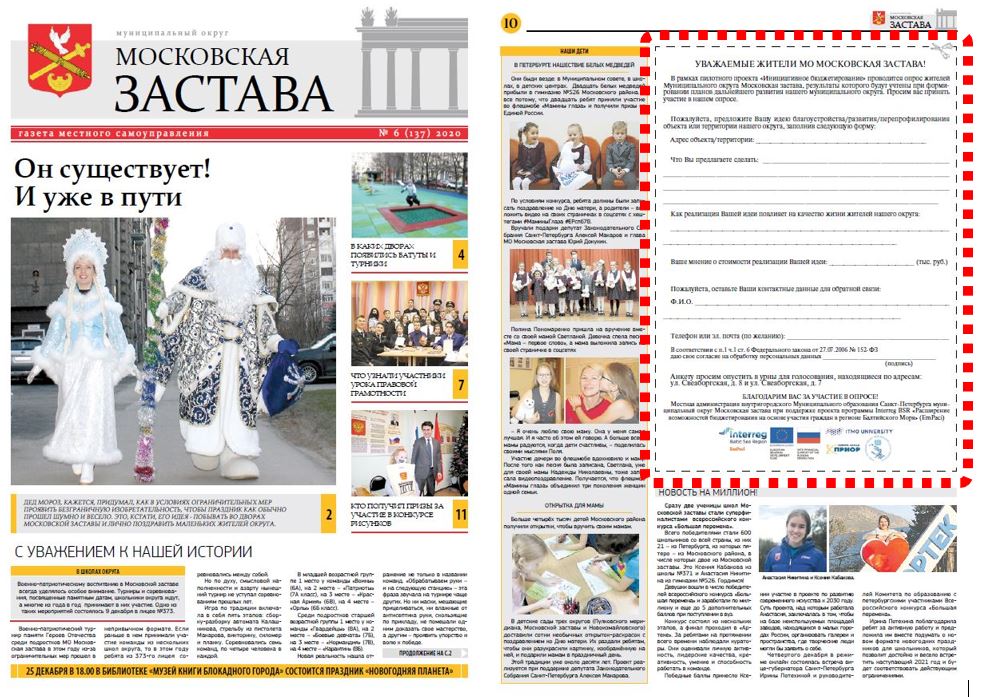 On December 7-9, ITMO University held an advanced training course on the topic "Digital Urbanism", part of which was the session "Digital Tools for Participatory Budgeting". This training was attended by over 260 representatives of executive authorities and municipalities of the North-West Federal District of the Russian Federation. Materials for the session were prepared by the Russian partners of the EmPaci project using the Project’s training materials. The PB topic interested the audience and communication with the teacher in the form of questions and answers lasted for several days. 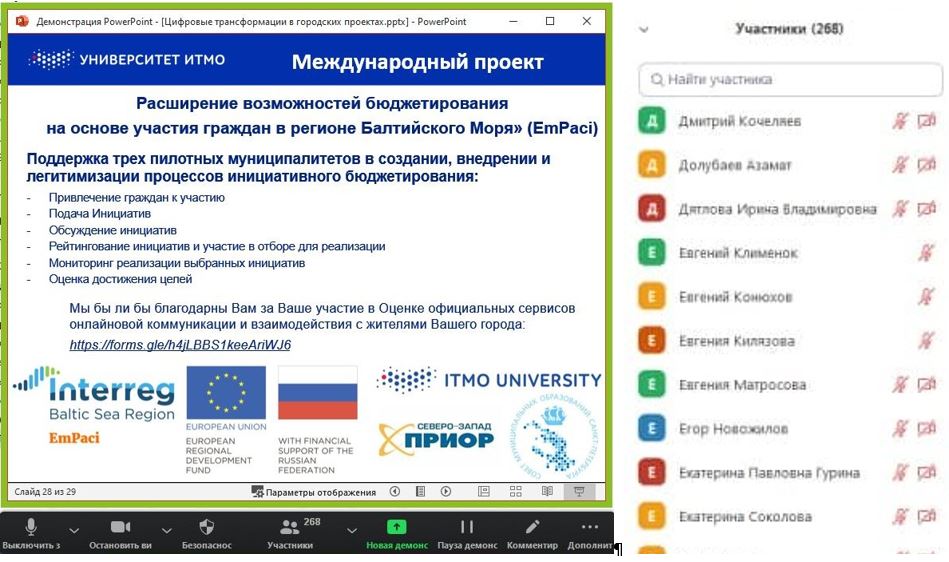 7th International Annual Conference EGOSE 2020  is organized by the joint efforts of the E-Governance Center of ITMO University and North-West Institute of Management, branch of Russian Presidential Academy of National Economy and Public Administration (RANEPA). The conference aims to address the main issues of concern within the Information Society, e-government, e-governance, and e-democracy. The Conference provides a platform for networking and collaboration of eGovernance experts in the Eurasian area from the whole world.

At the end of the conference program, all Russian EmPaci project partners organized a round table with the aim of acquainting the conference participants and specially invited guests with the goals, progress and results of the EmPaci project, as well as discussing the prospects for the development of PB in Russia. 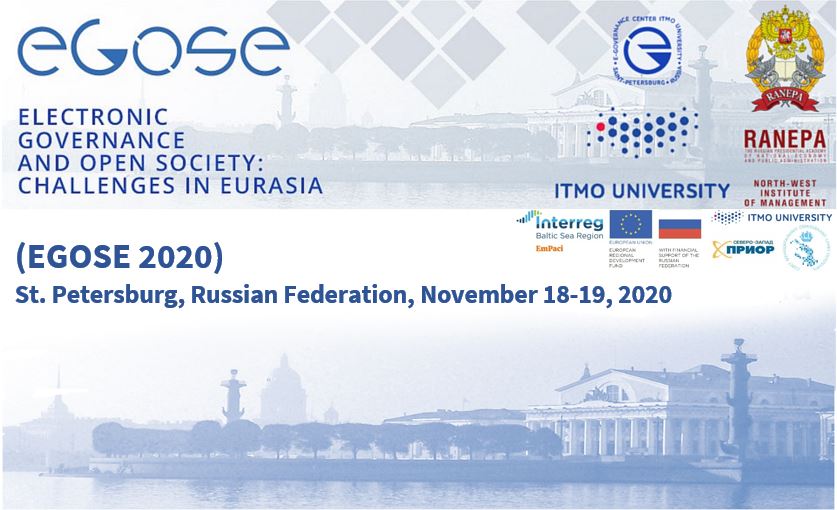 As a result of negotiations between the Russian partners of the EmPaci project and the management of the startup "Otmetky.ru", an agreement was reached on cooperation in the joint creation of a web platform for participatory budgeting for the municipality of Suojärvi, Republic of Karelia.

The created platform will provide support for such processes as: Submission of initiatives by, their publication and geo-positioning on the district map, discussion of submitted initiatives with the exchange of arguments, rating voting, publication of decisions made and monitoring of the implementation of approved initiatives. 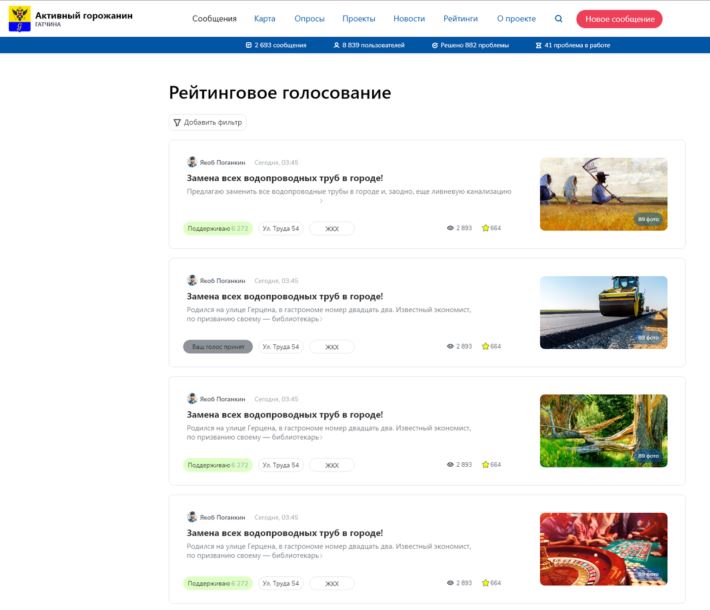 The Gatchina administration has decided to revise their newly created site "Active Citizen", designed to involve citizens in the city management processes, in order to add the functionality necessary to implement participatory budgeting processes. Methodological support for this refinement will be provided by the Russian partners of the EmPaci project in cooperation with the Autonomous Non-profit Organization "Competence Center of the Leningrad Region" and the North-West Institute of Management of the Academy of National Economy and Public Administration

In Russia the development of Participatory Budgeting (PB) started in 2007 with the emergence of the first practices of citizens' participation in decision making on budget funds spending at the local (municipal) level [1]. First, the World Bank's Program for Supporting Local Initiatives (PSLI) was introduced, then the "Citizen Budget" and "Citizen Initiative" programs were introduced, and in 2012 - "Participatory Budgeting" of the European University in St. Petersburg. In Russia PB activities are supported by the Ministry of Finance. Since 2018 the study of best practices in the development of Participatory Budgeting in the regions and municipalities of the Russian Federation is conducted. The results of the study are represented in the Report, prepared by the Center for Initiative Budgeting at the Financial Research Institute of the Russian Ministry of Finance with the support of the Department of Budget Methodology and Public Sector Financial Reporting [2].

The Table demonstrates the availability of ICT tools at the information resources of Participatory Budgeting (including portals/websites) in the North-Western Federal District of the Russian Federation at each stage of PB projects’ implementation in the region:

Table. ICT Tools for Citizens Participation on the PB Information Resources in the North-West of Russia

Kaliningrad is preparing to introduce a project on Participatory Budgeting. In 2020, the city administration will conduct a competitive selection of initiative projects for the improvement of public areas, including road transport infrastructure. Call for proposals will be announced in the nearest time. The results will be summed up till April 30, 2020, after which the winning projects will start to be implemented [3].

At the moment, only related PB practices are registered in the Pskov Region. Preliminary events on launching the regional PB programs are planned nearest time [4].

The Project "Your Budget" in Saint-Petersburg

Information about the project is available on the portal of the project "Your Budget" (https://tvoybudget.spb.ru/). The question s about the project can be done in VK and Facebook groups (vk.com/tvbspb; facebook.com/tvoybudget). Work online is conducted in the corresponding group in Vkontakte. The project's information resources contain a schedule of lectures for budget commissions in all districts and their locations. Educational events, like all other meetings of Budget Commissions, are open to everyone.

Project "I Plan a Budget" on the territory of Sosnovy Bor, Leningrad Region (http://sbor.ru/finance/bd/otkrbud/plan)

Information about the work of the Initiative Comission of the project "I Plan a Budget", including discussion of projects proposals, is posted in the Vkontakte group "I plan a budget. Sosnovy Bor" http://vk.com/club51946917. Through the official Vkontakte group (vk.com/sbor.budget) citizens can apply for participation in the project. Information about the project and all events are represented on the official website of the city administration http://sbor.ru/finance/bd/otkrbud/plan . Leading information resources of the city are involved in promoting the project. It should be noted that online voting is taking place in the social network "Vkontakte", in the official group of the project "I Plan a Budget" for the initiatives presented at the "Public Voting".

In the North-Western Federal District of Russian Federation almost all the regions (except the Kaliningrad and Pskov Regions) have implemented Participatory Budgeting practices. In the Kaliningrad Region, the launch of PB projects is planned in 2020. In the Pskov Region, related practices are currently implementing; the realization of PB projects is planned in the nearest time.

In the North-West of Russia all 3 practices of Participatory Budgeting, taking place in Russia, are represented:

As for the use of modern ICT in the implementation of PB projects in the North-Western Federal District of Russian Federation, the following features can be highlighted:

During the Informing stage of PB projects the following resources were used:

The use of the information management system in the form of a separated Internet resource (used in some other regions of Russian Federation) is not presented in the Region.

Often, the available information resources of Participatory Budgeting are used for placing the normative legal acts and reference materials or as an analogue of the media. In some cases, they are used for conducting the surveys. A characteristic feature of the implementation of PSLI in municipal practices is the predominance in the use of traditional mass media in the course of PB projects’ information support.

As for the stages of Public Discussion and Selection the proposals, ICT tools for implementing these functions are not available in most of the PB information resources, presented above. In some municipal practices, deliberation and voting on proposals take place in the appropriate groups in “Vkontakte”. In regional practices, these functions are performed by specialized Councils (or Commissions).

However, there are some examples of inappropriate use of ICT in the implementation of PB practices in the North-Western Federal District of the Russian Federation. In particular, in the Nenets Autonomous District, the use of digital tools at the submission of application stage complicates the procedure (in accordance with the Requirements for submitting an application [5], the applicant for a grant submits to the Department an application for participation in the competition, containing the documents required by the regulations both on paper and in electronic form. Scanned copies of printed documents are submitted electronically [6].

In December 2019, the monitoring of the e-participation online platforms in Russian regions was conducted by e-Governance Center of ITMO University within the project of the Russian Science Foundation. As a result of this study, the information about the activity in the sphere of the development of IT systems for Participatory Budgeting and "Open Budget" in the North- West of Russia was obtained. This information will be provided in the next issue of the newsletter.